Ocean Climate Is Changing. Here Is How We Know.

Temperatures in the northeast Pacific have increased by over 1.25 °C since observations began in 1956. That record is proving invaluable to ocean comprehension.

The Ocean Is Warming

Like a dry sponge under a slow faucet of climate change, the ocean is absorbing the Earth’s excess heat and we have the records to prove it. Decades of monitoring off the coast of British Columbia provide evidence of warming that is as true at the surface (+2 °C per century) as it is over one kilometre beneath the sea surface (+0.1 °C per century) (Cummings and Ross, In Press). This warming is changing the habitat in ways that are still very active areas of research, but we know much about this one place thanks to the tireless dedication of those researchers who made this work possible. 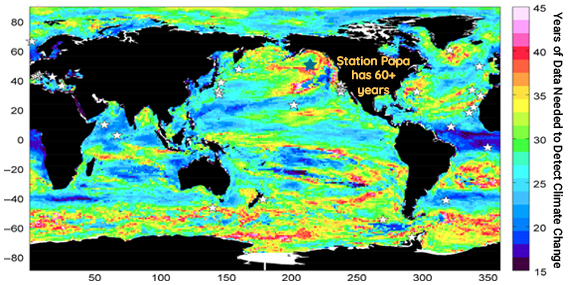 One Place We Know “Normal”

Station Papa looks like most anywhere else in the ocean when you’re on a ship. But this place, at 50 °N 145 °W and 1,500 kilometres offshore, isn’t just anywhere … it’s one of just a handful of places where we know what a “normal” actually looks like. We know this because over 60 years of data has been collected from this unassuming place, making it the longest ocean time series anywhere. Along the way, it’s been precisely because this is not a special place that we have learned about processes that would have been too challenging to study elsewhere.

For a country to have a reliable weather forecast, it needs to know what is happening upwind. Before satellites, weather